Tips to Keep Your Family Safe from Food Poisoning 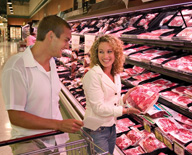 A century ago, food-borne diseases, like typhoid fever and cholera, were common. Even though improvements in food safety have conquered these illnesses, many food-borne diseases are still causing harm today.
According to the Centers for Disease Control and Prevention, approximately 76 million cases of food-borne disease occur each year in the U.S. The most commonly recognized food-borne diseases are those caused by salmonella and campylobacter. Together, these bacteria cause 80 percent of the illnesses and 75 percent of the deaths associated with meat and poultry products. Seafood is a leading cause of food-borne illness.
Global Food Technologies, a company that produces technology instrumental to food safety, offers the following tips to keep your family safe from potentially fatal food-borne illnesses:
•    Check color, odor and texture. When purchasing chicken, its coloring should be pink, not gray or yellow. Fish meat should be shiny and firm, not easily separated from the bone and have a fresh, mild smell.
•    Inspect the package. Purchase meat and seafood that has received an anti-pathogen treatment that doesn’t alter the food’s color, smell, taste or appearance, such as those offered by Global Food Technologies, which is designated by the iPura brand. Be sure to avoid products that have outlived their “sell-by” dates or have dents or tears in their packaging.
•    Avoid cross-contamination. Use separate cutting boards  — one for raw meats and another for fruits and vegetables — to diminish the likelihood of cross-contamination. Also, wash your hands thoroughly with antibacterial soap before and after handling raw meat and seafood.
•    Store at the right temperature. Fresh seafood and poultry should be stored at 40 degrees or below to ensure freshness. When cooking poultry, breasts should be cooked at 170 degrees, whole chicken or turkey at 180 degrees and ground poultry at 165 degrees.
To learn more about food safety and Global Food Technologies, visit www.globalfoodtech.com.