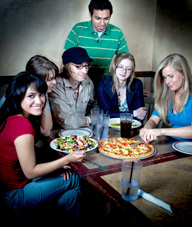 For people with celiac disease, going out to eat can prove difficult – they might not be able to find any gluten-free options on the menu, or they might receive food that has been contaminated on shared kitchen tools.

One percent of Americans have celiac disease, an autoimmune condition that damages the lining of the intestine. Celiacs must avoid any food that contains gluten, which can be found not only in obvious items like bread, but also in beer, soy sauce, gumbo and condiments. For many celiacs, eating in seems like the only safe option.

But some restaurants are taking steps to make dining out easier for celiacs. For example, UNO Chicago Grill has recently unveiled a new, gluten-free menu. This menu, which includes pizza,  steaks, salads, chicken and fish, appeals to a wide variety of customers. But it is especially geared toward those with celiac disease, and its most popular item by far is UNO’s gluten-free pizza.

Prepared with a thin crust, and offered in cheese, pepperoni or veggie varieties, UNO’s gluten-free pizza allows celiac sufferers  to enjoy a previously forbidden food that most people take for granted.

Were a celiac to eat a piece of regular pizza, they could experience migraines, vomiting, anxiety, skin rashes and abdominal pain. Undiagnosed celiac disease can lead to serious illness, including anemia, liver diseases, intestinal damage and malnutrition.

Celiacs can only hope that other restaurants follow suit in developing gluten-free menus.